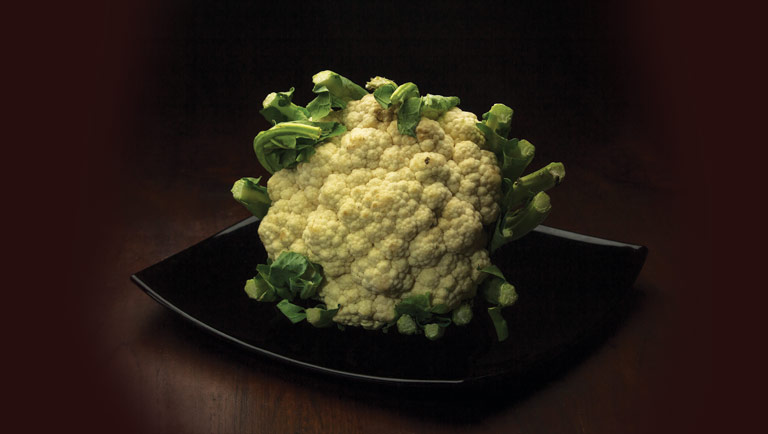 Cauliflower derives its name from two Latin words; - caulis(cabbage), and flos(flower). The scientific name of cauliflower is Brassica oleracea var. botrytis, and it belongs to the family of Brassicaceae or Cruciferae. To the same family belong, many winter vegetables like broccoli, cabbage, carrot, beetroot etc. Cauliflower farming can be started in the beginning of winter season i.e. October and November.The flowers of the plant are not edible. The head called curd, which is formed at the final stage of its growth and just before reaching reproductive stage is the edible part.

Seed production isn’t possible under the climatic conditions of Kerala. Government and private nurseries produce seeds that required for sowing during the winter season in Kerala. Since the seeds are the size of mustards, they can only be sowed in protrays. They should be grown here until 3-4 leaves are formed. Before replanting them, the ground must be dug deep and readied. Add 75 kgs of organic manure per cent. The saplings should be replanted here. After this, apply twice, 1.5kgs of urea, 2kgs rajphos, 1 kg potash per cent. Adding more soil after the second round of application, will increase the growth of curd.

In fifty days of replanting, curd is formed, and in 3 weeks’ time, it will be ready for harvest. The curd is usually white in colour. In regions of higher temperatures, they have light yellow colour. If the leaves cover the curd, the colour and quality will be maintained. Lack of water and manure can decrease the size of the head.Temperature variation during the time of curd formation can affect cauliflower farming. The growth of the plant will be slower if it is exposed to high temperature and severe sunlight during its initial growing stages. Instead of curd formation, smaller leaves are formed and physical growth slows down. Curds don’t form in such plants.

Cauliflowers leaves wilt and dry due to the attack of aphids and leaf lice. Use of organic pesticide can be helpful here. Soft rot and black rot are two diseases caused by bacteria. Since they spread through seeds, the quality of the seeds should be confirmed. Seeds can coated with pseudomonas. Or pour pseudomonas solution on the ground selected for farming.

It contains carbohydrates, protein, Vitamin A, and C. It also contains minerals like phosphorous, potassium, calcium, sodium, sulphur, iron etc. It also contains glucosinolates, widely reported as an important factor in the curing of cancer and many heart diseases.